Ayrshire is home to 5 of the 6 amphibian species found in Scotland, and with plenty of wet spots for them to breed in, the west coast of Scotland makes an ideal habitat for amphibians. The Common Frog Rana temporaria, though very under recorded in Ayrshire, is widely distributed throughout the region. With smooth, moist skin varying from yellow to brown or grey, it spends surprisingly little time in water, except when breeding, and needs damp, terrestrial habitat such as rough grassland, gardens and woods for shelter and feeding.

Although somewhat similar in appearance, the Common Toad Bufo bufo is stockier with warty skin, varying from greyish brown to dull green, and copper-coloured eyes with a horizontal pupil. This species is rarely found in garden ponds, preferring to breed in larger ponds than frogs.

All three native newts can be found in Ayrshire, although like the frog and toad, are very under recorded. The Common or Smooth Newt Triturus vulgaris and its close relative the Palmate Newt Triturus helveticus occur in similar habitats. Both species occur in ponds with a range of submerged and emergent vegetation, though the latter is more tolerant of acidic waters.

The Smooth Newt has a whitish underbelly and throat, the male having a central broad orange strip covered in brown spots, developing a deep wavy crest in the breeding season.

As our focus species group this year, why not download our amphibian and reptile booklets and get recording. Lets put some records on the map! 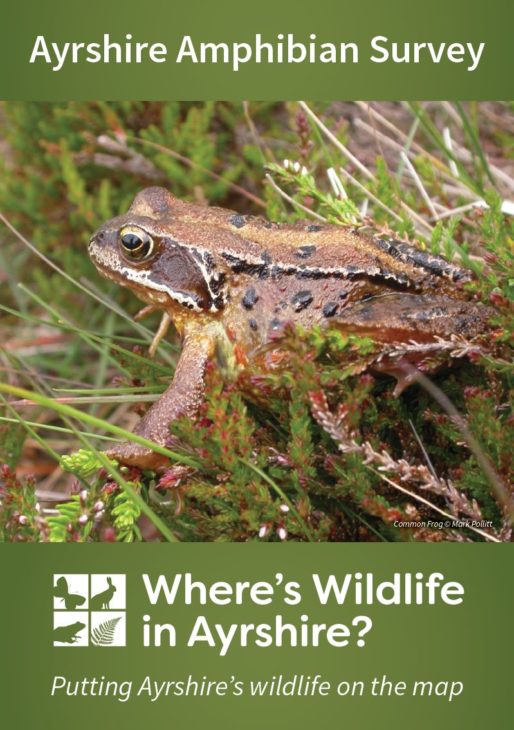 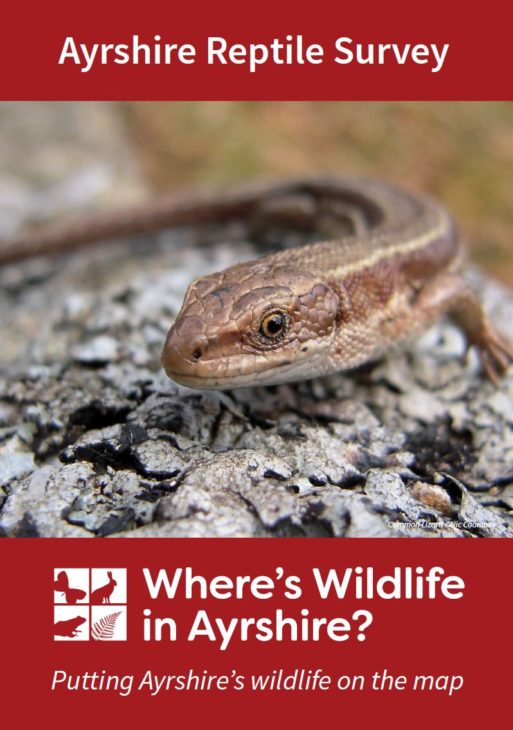 The Palmate Newt has a dull colouring of brown with black stippling, with few spots on the under belly and none on the throat area. When breeding, the male’s hind feet become black and webbed and have a hair-like filament on the end of the tail.

The Great Crested Newt Triturus cristatus is a European protected species, and has thus far only been recorded at one site in South Ayrshire. It is the largest of the three newt species, with very dark brown or black coloration and bright orange underparts. During the breeding season, the male develops a jagged edged crest on its back.

Three reptile species are currently known to occur. The Slow Worm Anguis fragilis is again very poorly recorded in Ayrshire, with records only on Arran and Great Cumbrae. The Slow Worm is often mistakenly described as a snake; in fact it is a legless lizard. Colours can range from light grey to dark coppery brown, and males occasionally have distinct blue spots. Slow Worms live in a range of habitats, including woodland edges, roadside verges and gardens where they often fall victim to cats.

The Adder Vipera berus has suffered significant declines in the last 100 years, and like the other reptiles in Ayrshire, are very poorly recorded, with records only from Arran and 2 records in South Ayrshire. These small snakes are recognisable by the dark zigzag stripe down their backs. They are timid creatures, undeserving of their fearsome reputation. They are common across much of Scotland, and there is no ecological reason why they would not occur in Ayrshire. Adders formerly suffered widespread persecution and large numbers were killed each year due to misconceived fear and prejudice. Today the species is protected by law and it is illegal to kill, injure or harm them.

The Common or Viviparous Lizard Lacerta vivipara, has short legs, a rounded snout and a thick head in relation to its body, and is the only other reptile species found in the region. The majority are brown in colour; however, there is the occasional green individual. Each sex has different coloured underparts, with the male being orange with dark spots and the female cream in colour. The lizard can be found in various habitats, including damp, tussocky grassland, heath land and woodland rides. Basking is important, as with all reptiles, and in good areas, it is possible to find groups of lizards basking together. There are a few records of this species scattered across Ayrshire, from a cluster on Arran, to a few individual records across the rest of the county.