I have had an interest in the Scottish Oedemera species (False blister beetles) for some time. Their relative distributions of the two main species found in Scotland are not clear with O. virescens being one of the commonest beetles to be found in Ayrshire in May and June while O. lurida seems much less common.

In a quest to find out more about these two species, I would like to ask wildlife recorders across Scotland to look out for and record these beetles. Any records of any of these species would be greatly appreciated. Although the two species are superficially very similar they can be separated relatively easily, particularly the males. See below for a guide to separating the two. Records should obviously have the basic information (date, location, grid ref etc) but should ideally be accompanied by a photo or a specimen to aid verification. Records from D&G or Ayrshire can be sent to SWSEIC using the usual routes or sent direct to Bruce.

The general shape of all four Oedemera species is very similar. They are all slim with tapering elytra that have longitudinal ridges and could at first glance be mistaken for longhorn beetles. There are two species of Oedemera that occur in Scotland and another two that are much scarcer. The relative distributions of the two main Scottish species are not well known and more records are needed in order to clarify the situation.

7-9mm. A slim, dull ‘sage green’ beetle that can be abundant and is usually found in flowers, often buttercups. The males (see photo) have slightly swollen femora while the femora of the females are slim.

This appears to be the more widely distributed species with a lot of records from south west Scotland. Until relatively recently it was a Red Data Book species more or less restricted to the north east of England but it appears to have expanded its range although it is still classed as Nationally Rare. From a few records in Ayrshire in the early 21st century it seems now to have spread north with a 2018 record from Skye.

6-8mm. Very similar in appearance to O. virescens and has similar habits. While on average it is slightly smaller this is not a good distinguishing characteristic. Both sexes have slim femora so the two species are easily confused, especially as they share similar pollen feeding habits. A guide to separating the two species is given below.

Although common in England there are very few Scottish records. However it is possible that it is more widespread than currently realised and more records are needed.

For help with separation of the two species please refer to the picture key below.  A broader key to the Oedemeridae family can be found here. 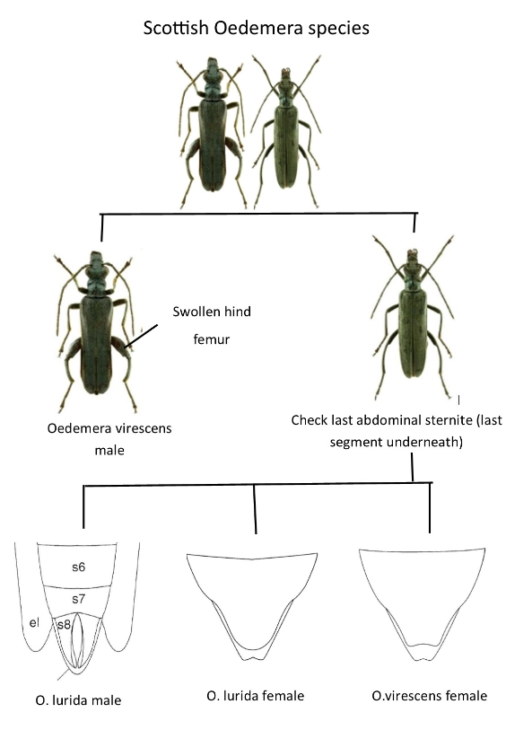 The focus of this request for records is very much on O. virescens and O. lurida. As stated previously, records should where possible be accompanied by either a specimen or a good photo plus date, grid reference and location. However there are the two other scarcer Scottish species which should also be considered in SW Scotland.

Swollen-thighed beetle Oedemera nobilis: 8-11mm. O. nobilis is larger and is a much brighter green with slimmer elytra that are separate at the apex. It is common and widespread in England but has not been recorded in Scotland. The males have grossly swollen femora and while the females’ femora are slim their colour and larger size should distinguish them. Another pollen feeder, if it occurs it is likely that to be found in the very south of Scotland.

Oedemera femoralis: 13-20mm. This is much the largest member of the genus and is brown rather than green. It is also nocturnal and is found on trees such as willow. It has been recorded in Scotland, and it seems likely that any new records will be in the very south.

Any records of these would again be welcome.