Lynx in Galloway in the Eighteenth Century?

This blog is written in response to a recent paper by Lee Raye of the Open University and published in Mammal Communications, the journal of The Mammal Society, which describes potentially ‘reliable’ evidence that Eurasian Lynx Lynx lynx may have been present in the Auchencairn area of Galloway in the 18th century. This is much more recent than previously thought, based on evidence from other parts of Britain. However, SWSEIC Project Officer and local environmental history enthusiast Peter Norman doubts the credibility of the new evidence…

Whether or not Lynx was present in Galloway in the 18th century is of minor relevance in any debate on whether the species should be here in the future, but as a piece of academic research, the evidence presented by Lee Raye does not stand up to scrutiny.

Firstly, Pococke’s description of the cat should not be treated as a scientific statement of fact, and Raye’s claim that it most resembles a Lynx is unconvincing. The pelage, as described, may resemble Lynx more closely than Wildcat, but it would seem doubtful, to say the least, that Lynx would rear their young in a bird’s nest. Feral cat, which is variable in pelage and size, seems a more likely candidate for his description, but this option was not considered by Raye.

Secondly, Pococke was an Irish clergyman who visited Scotland fleetingly. He made numerous errors in his accounts, even about the places he is known to have visited, for example placing Caerlaverock in Clydesdale. With regard to the cats, he does not claim that he saw them first hand and we do not know from whom he got his information. Furthermore, the cats are described as being known and hunted by local people, yet no other writer of the time mentions them. Pococke did, however, mention Maxwell of Munches from the neighbouring parish, the estate archives (1450-1968) for which still exist in the Dumfries Archive Centre, if someone had the time to wade through them in search of a reference to Lynx?

Thirdly, and most importantly, the habitat of 18th century Auchencairn would have been totally unsuitable for that required by the species as we know it today, an ambush predator requiring extensive woodland, and we have no evidence that Lynx ecology has radically changed since the 18th century. Raye makes estimates of potential woodland cover in the Auchencairn area, based on various assumptions. These amount little more than guesswork, when more detailed and specific information is available. 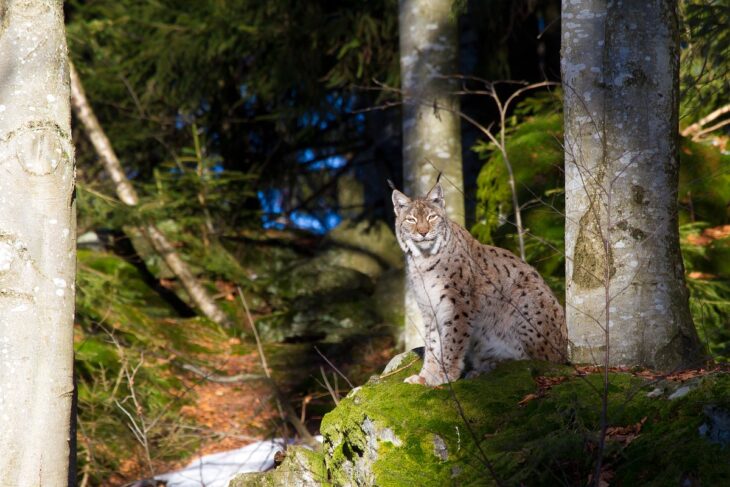 The maps of General Roy (c1747-55), the go-to source for the landscape historian interested in mid-18th century Scotland (but not referred to in the study), depict the area as virtually treeless. Roy was tasked with producing a map for military purposes, rather than a highly accurate depiction of the countryside and he certainly made mistakes, but the 100s of detailed estate maps that have recently been made available by the Dumfries Archival Mapping Project and the National Library of Scotland (see https://maps.nls.uk) back up Roy’s broad picture of a largely treeless landscape in Galloway. There is only one map available for an estate in the relevant parish (Rerrick) at the time in which we are interested (1770), but that map only shows tiny slivers of woodland.

Raye describes modern Auchencairn as “a mountainous area in the now well-wooded Southern Uplands”. Though the minister of the parish, writing in the Old Statistical Account (OSA 1791-93) refers to Bengairn as a “mountain” covered with heath, at only 391m (1283 feet) few visitors today would recognise the area as mountainous. The current woodland is almost entirely 20th century commercial conifer plantations and in the 1790s, the OSA describes the parish, other than the hills and mosses, as “the whole is arable” “along the edges…skirted with natural woodland”. Such small pockets of woodland would have been subject to intensive coppice-management. Even if Pococke was referring to wilder, more mountainous areas elsewhere in Galloway, there is considerable documentary and palynological (pollen) evidence that these too were largely treeless in the 18th century.

There is a record in the historical literature, not too far from Auchencairn, which specifically mentions Lynx and has more credibility than Pococke’s account. However, it too is dubious. Bones excavated in the 1870s from Borness, west of Kirkcudbright Bay, include three that possibly originate from a Lynx. The following excerpt is from Corrie et al (1875):

Of the three published accounts of these excavations, the reference above from the first account is the only one to mention of the possibility of Lynx, the bones being referred to elsewhere as Felis catus, the domestic cat. Even if these undated bones were those of a Lynx, human artefacts found with them date from the 1st and 2nd centuries AD, up to Roman times – far earlier than the dates claimed by Raye.

In conclusion, in my opinion the evidence of Lynx breeding in the Auchencairn area in the 18th century is, at best, extremely weak and unreliable.

‘A map of over and nether Auchenleck; lying in the parish of Rerrick and Stewartry of Kircudbright, North Britain.’  (Surveyed 1770). Available at https://maps.nls.uk/view/216443765